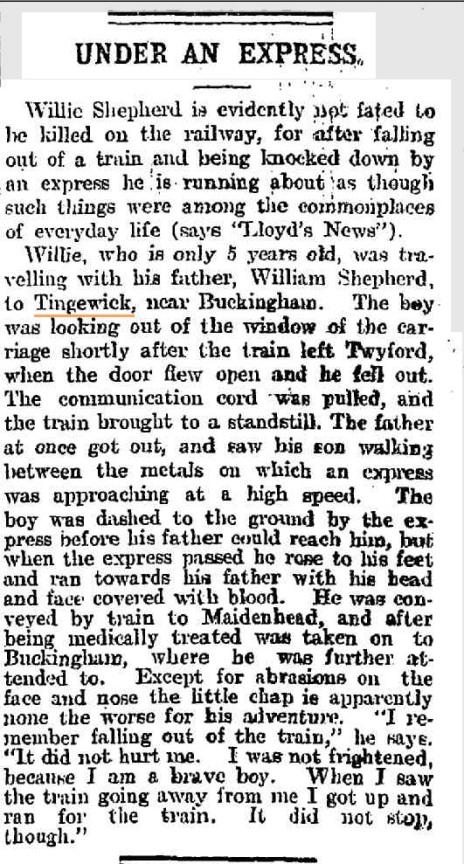 UNDER AN EXPRESS.
Willie Shepherd is evidently not fated to
be killed on the railway, for after falling
out of a train and being knocked down by
an express he is running about as though
such things were among the commonplaces
of everyday life (says ‘Lloyd’s News’).
Willie, who is only 5 years old, was tra-
velling with his father, William Shepherd,
to Tingewick, near Buckingham. The boy
was looking out of tbe window of the car-
riage shortly after the train left Twyford,
when the door flew open and he fell out.
The communication cord was pulled, and
the train brought to a standstill. The father
at once got out, and saw his son walking
between tbe metals on which an express
was approaching at a high speed. The
boy was dashed to the ground by the ex-
press before his father could reach him, but
when the express passed he rose to his feet
and ran towards his father with his head
and face covered with blood. He was con-
veyed by train to Maidenhead, and after
being medically treated was taken on to
Buckingham, where he was further at-
tended to. Except for abrasions on the
face and nose the little chap is apparently
none the worse for his adventure. ‘I re-
member falling out of the train,’ he says.
‘It did not hurt me. I was not frightened,
because I am a brave boy. When I saw
the train going away from me I got up and
ran for the train. It did not stop,
though.’

A doctor declares that so long as a cyclist,
after a long ride, has a good appetite, does
not feel a desire to go to sleep at once,
and is not annoyed by heavy dreams when
he goes to bed, he may consider that he
has not made too great a demand on his
physical resources.